What is a window function call? My explanation:

Ok, that’s probably still not immediately understandable, so let’s walk through an example. Imagine you’ve been tracking expenses in Postgres:

Now, say you wanted to see how much each expense compares to the average:

You could use a subquery to calculate the average:

But we could also be a little fancier and use a window function call:

Although we have some new syntax to understand (which we’ll get into later), that’s noticeably shorter! What just happened?

Let’s try to visualise the window function call. For each row, Postgres calculates the average cost of the rest of the table, which is the default “window frame”: 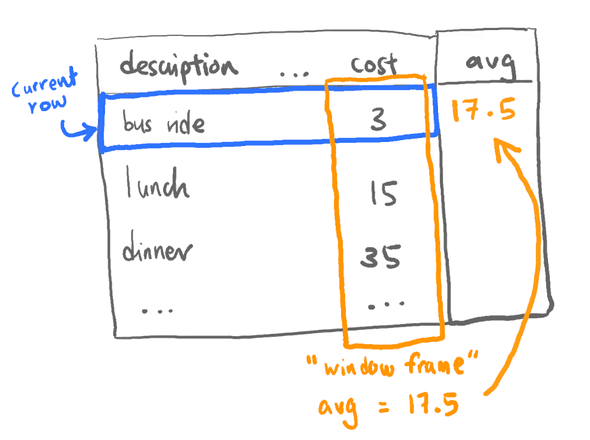 Now if that was all you could do with window function calls, I’d be disappointed too. Thankfully, it’s not! Aside from being shorter, there are some key features that are harder to replicate with subqueries:

Let’s try calculating over a subset. Knowing the average across all expenses wasn’t very helpful - a big purchase could skew the calculation, so let’s instead compare each expense to the category average: 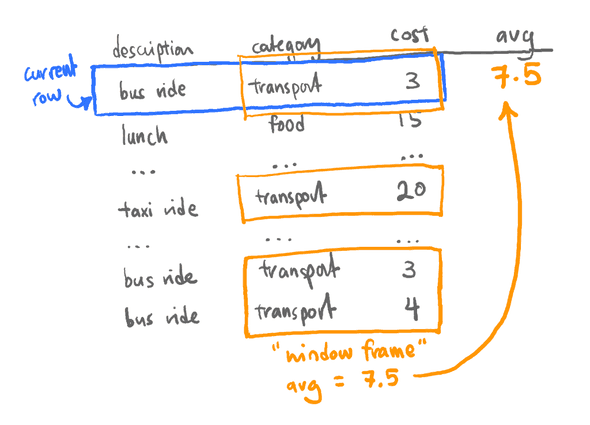 For each row, our new window frame includes only other rows with the same category, and the average is calculated based on those rows.

This is also a good time to take a brief look at the syntax we’ve used so far:

It’s coming to the end of the month, and you want to know the biggest expense in each category, for each day. There’s a window function for that - rank!

With rank, we can calculate the order of each row in it’s window frame (Note that the following query still returns every row in the table, not just the top expenses - we’ll fix that later):

Notice the additional syntax in our window function call:

So for each row, our window frame is other rows with the same category and created_at date, and we order the rows from highest to lowest cost.

Now that we have a ranking, we could use it as a subquery and filter out expenses that are rank 2 or higher.

Which leaves us with exactly what we want - nice!

I hoped that helped you grok window functions! If you want to play around with the data in this example, there’s an sqlfiddle - in case that doesn’t exist at the time of reading, you can also get the SQL to create the table and query the data from this gist.

In the next few articles, we’ll look into the individual window functions, starting with those for ranking rows.

Meta-Postgres: What constraints does a table have?