”A class should only have one reason to change” is a mantra that Object-Oriented advocates have chanted for years. Dubbed the “Single Responsibility Principle” (SRP), it remains somewhat abstract till this day ✨. Abstract enough, in fact, that it’s originator (Robert Martin) felt it worthwhile to explain again in a blog post - 14 years after he first wrote about it!

That blog post begins by referencing and quoting a 1972 paper, ”On the Criteria To Be Used in Decomposing Systems into Modules” by David Parnas:

“We have tried to demonstrate by these examples that it is almost always incorrect to begin the decomposition of a system into modules on the basis of a flowchart.

We propose instead that one begins with a list of difficult design decisions or design decisions which are likely to change. Each module is then designed to hide such a decision from the others.”

The paper seemed significant, as Martin wrote that the SRP appeared “to align with Parnas’ formulation”. Could it demystify the SRP? What exactly was this paper about?

(Note: I’ve tried not to abstract too much of the paper, in the hope that you’d be able to draw your own conclusions as well.)

First, Parnas sets the stage - he would compare two criteria for modularizing a system, showing that one provided superior flexibility. The system in question was a KWAC (KeyWord Alongside Context) index generator.

KWAC was an indexing system for technical manuals, allowing a reader to quickly find where in the manual a keyword was used. In addition to showing the keyword, KWAC would show the rest of the sentence as well, it’s “context”: 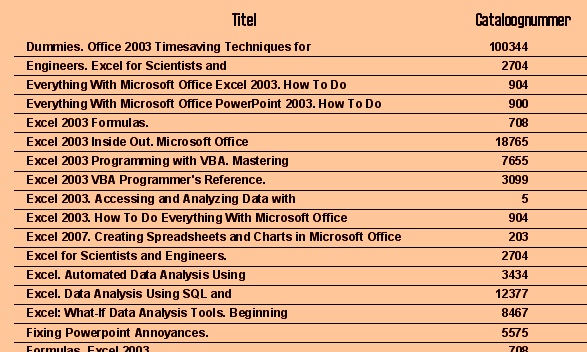 To build the KWAC index, the system would take in file of sentences. Say the input file looks like this:

For each line, the system looked through every word (the “keyword”), generating a KWAC entry. This was done by “circularly shifting” words that came before the keyword, appending them to the end. Then, it would sort the entries alphabetically. For example, given the above file, we’d get:

The next sections explain Parnas’ modularizations. This video explanation (starting from 17:16) helped me visualise and understand them, and I’m borrowing liberally from it 🙇‍♂️.

In the first modularization, Parnas modelled the problem as a flowchart, using the individual steps to break apart the modules (an approach which I’m guilty of applying at face value): 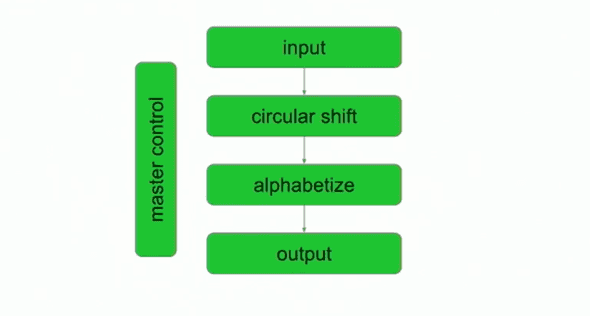 There’s a design flaw that isn’t obvious in the diagram - some common data that all modules need is stored in memory (a modern parallel might be a datastore), each module needing to know the low-level layout of the data. We’ll contrast this with Modularization 2 later.

Here’s what each module did:

A helpful visual summary of all the outputs and stored data from the video explanation: 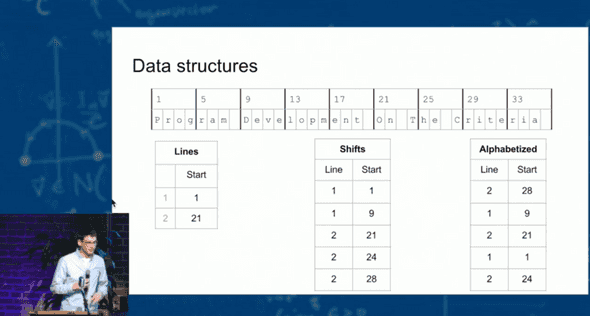 In this modularization, Parnas uses the criteria of “Information Hiding”. The definition is worth mentioning for it’s relevance to the SRP:

Every module in the second decomposition is characterized by its knowledge of a design decision which it hides from all others. Its interface or definition was chosen to reveal as little as possible about its inner workings. 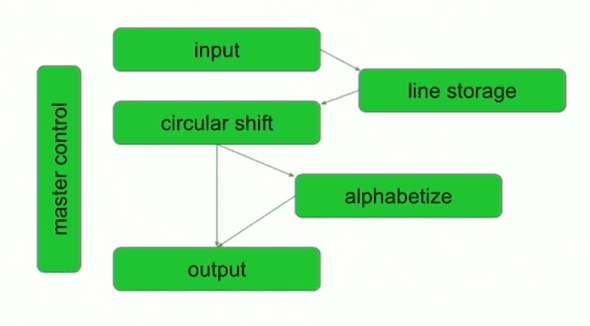 Interestingly, what one might typically think as the general “responsibility” remains the same - modules are still mostly split along the same functionality lines. Instead, the major differences that I noticed in this modularization were:

Each module in greater detail:

While other comparisons were made, the analysis of changeability speaks most to the SRP. Parnas begins by suggesting some “likely” change scenarios. Most require many modules to be updated in Modularization 1, but have a much smaller blast radius in Modularization 2.

Let’s take Scenario B below as an example - since all the modules in Modularization 1 depended upon a specific layout of “Characters” in memory, changing that layout would require changing every module. However, in Modularization 2, this would only require a change in the implementation of “Line Storage” - the interface could stay the same, meaning other modules were shielded from this change!

So the takeaway here is that good “information hiding” (a.k.a the SRP) results in a system that adapts more easily to changes.

So where does the paper leave us in relation to the SRP? Personally, I left with a better understanding of why it was important - it should result in a system that is easier to evolve with changes in requirements.

However, even with the (helpful) example, we are left with an abstract criterion of “information-hiding” and starting with a “list of difficult design decisions” or “design decisions which are likely to change”. The SRP, it seems, remains more art than science.

Discuss on Hackernews, or continue the conversation on Twitter.

(I apologise for the mix of American and British english 😆.)

Why use Polymorphism in OOP?