In this post, we’ll learn about the Visitor design pattern and it’s tradeoffs by looking at a real world example: Rubocop, a Ruby linting and formatting library.

What is the Visitor design pattern?

The visitor design pattern separates the operation to be performed from a complex object structure (e.g. a graph whose nodes have many types). 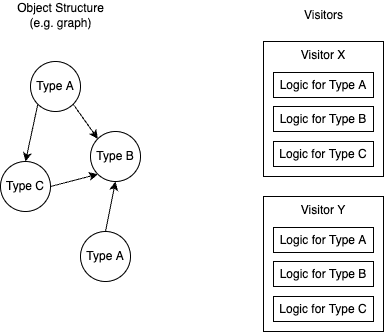 This makes it easy to introduce new operations (“visitors”) for the same structure, but comes at a cost - changing the object structure requires all visitors to be changed. So this pattern works best when changes to the underlying structure are rare, and we expect many different operations to be introduced.

Rubocop is a linter1 and formatter, which is a fancy way of saying that it checks the raw source code against a set of rules (e.g. for common errors or conformance to a style guide) and can autocorrect it. Each rule in Rubocop is called a “cop” and follows a visitor-inspired pattern.

Note that Rubocop doesn’t follow the classical visitor implementation2 exactly, but separates concerns similarly. We’ll look at how it tweaks the pattern, before describing the tradeoffs with real-life examples.

Before running any cops, Rubocop first uses the rubocop-ast library to create an Abstract Syntax Tree representing your Ruby code. This makes the responsibility of cops much simpler: they don’t have to worry about syntax correctness, and because code is pre-grouped and categorised in the tree, it’s easier to know when a linting rule should be triggered.

Let’s look at a simple example:

The parsed AST breaks down the code into relevant constructs based on Ruby’s syntax. We can visualize the above: 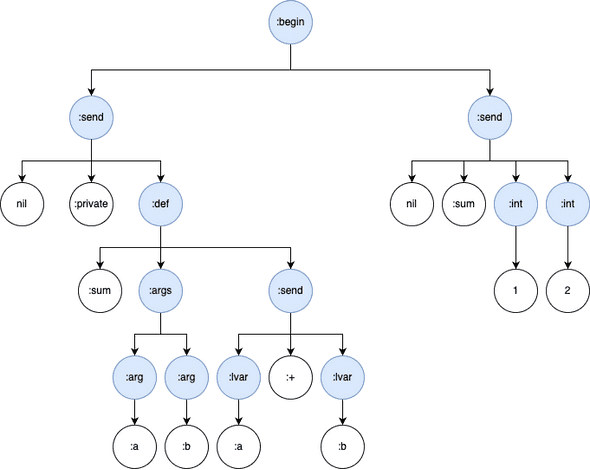 For now, it’s sufficient to know that the object structure is basically a tree - don’t worry too much if you don’t understand exactly how it works. (For a good overview of how this AST fits into the Ruby interpretation process, check out this great video by @OngMaple. You can also look here for a list of possible node types 🤯.)

Each linting or formatting rule in Rubocop is encapsulated in a “cop”, which is essentially a visitor. For example, let’s look at the DefEndAlignment cop. By default, this checks that end is aligned to def at the start of the line, e.g.:

Each cop defines on_#{node_type} methods, which the traversal mechanism will call when it hits a corresponding AST node. We can see the cop handles 3 node types, on_def, on_defs and on_send:

If you recall the AST from before, there weren’t any end nodes, and the structure itself left out indentations and spaces. So how does this linter work? Turns out that parser nodes still contain information about the source code (e.g. positions), and cops can use this in tandem with the original source code for linting.

Of note: this cop also does it’s own little traversal for on_send. This is because the send node contains the start position of the private keyword, but the position of end is still in the def node. Thus, the code accesses descendants to look for the actual def node. A visual from our previous example: 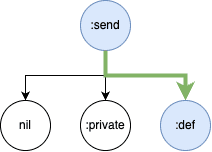 Also note that unlike the classical implementation, cops do not implement methods for all node types. Instead, there’s logic that skips non-existent methods during traversal, which is a nice segue to our next section.

Object structure and visitors meet in the Rubocop::Commissioner#investigate method. This method walks the tree and for each node, executes the respective on_#{node_type} method on all enabled cops.

The actual implementation is a little convoluted, with a fair amount of metaprogramming. It’s a fun detour, but feel free to skip this! First, my attempt to visualise the flow with a sequence diagram: 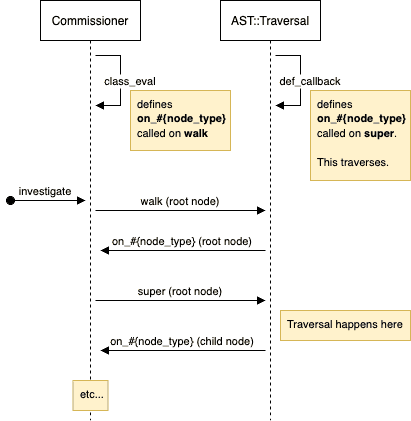 I haven’t dug up the why behind this particular design, my guess so far is (1) metaprogramming makes it easier to support new node types, and (2) this was a way to separate the traversal logic from the cop execution logic.

Note that the classical visitor implementation doesn’t dictate where traversal logic should go. In Rubocop, the main traversal is separate from both object structure and visitors, but in other situations it might work better to put the logic in the object structure (or some parts of it, e.g. composite elements might encapsulate their traversal) or in the visitor itself (e.g. if different visitors need to traverse in a different order)3.

Now that we know how Rubocop implements a visitor-inspired pattern, let’s briefly examine the benefits and cost of the design.

Benefit: Encapsulation of each Linting Rule in a Visitor

Each cop encapsulates the linting and formatting logic for a single rule, making it simple to disable or restrict the scope of that cop, without affecting other cops. In Rubocop, you can disable cops via a small config change. The traversal logic will then ignore those cops.

Changes to the underlying object structure may ripple through all visitors. For example:

Depending on the needs of visitors, objects in the structure may need to expose more information, potentially breaking encapsulation. In our example, Rubocop cops need to know about positions in the actual source code through methods like #loc, which is less useful for a program emulating the Ruby interpreter - it only needs to execute the logic represented by the node types.

I hope this helped concretise when and why you might want to use the visitor pattern. Here are some other examples you may want to look into:

I was invited to share about this at RubySG, here’s a video with some cold jokes:

Coupling is a Tradeoff

Why use Polymorphism in OOP?