I’ve been working through a course on Coursera recently, and it’s been a great opportunity to reflect on where I am in the “meta” of learning. This post walk throughs my current workflow before diving into the context behind it.

The workflow is loosely based on Zettelkasten, with a little thrown in from a “Learning to Learn” course I audited last year. I’m currently using two tools: Obsidian for note-taking, and Anki for testing myself / spaced-repetition. More on these in later sections.

My Obsidian knowledge base is about 6 months old (I’ve yet to migrate my older knowledge base) and looks like this, with a few top level folders: 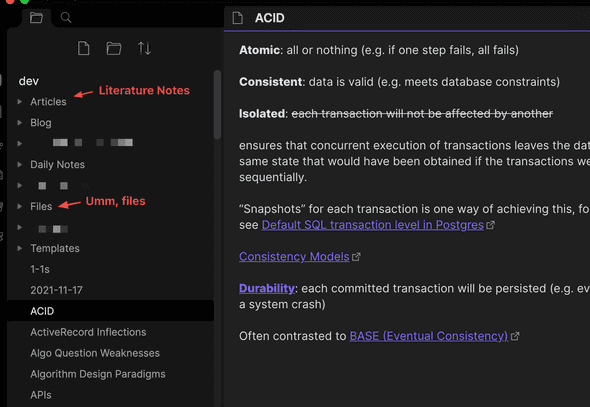 And the workflow for this course was:

Next I’ll go deeper into my influences.

This is a system of note-taking often mentioned together with Niklas Luhmann, who had a massive knowledge base (some say 90,000 index cards) and credited the system for helping him write prolifically. He wrote more than 70 academic books and nearly 400 scholarly articles! (Update: I did a deeper dive on Zettelkasten here.)

After multiple failed attempts at starting a hierarchical knowledge base, I’ve found elements of this approach freeing. Previously, I often got stymied by categorisation - what title should I give this note so it’s searchable? Which folder should it go into? Should I be using a tag instead?

Now much of this pain is gone, as I eschew traditional hierarchy (deeply nested folders), favouring smaller, “atomic” notes with connections between them (graphs). I think this maps a lot closer to the brain - after all, we draw metaphors or parallels from other disciplines, and may find ourselves often having to recategorise information (especially when learning something new). 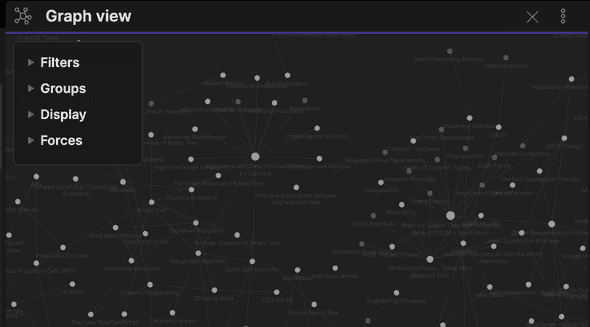 A related workflow I’ve adopted is a “pre-processing” step of first taking “literature notes” before converting to “permanent” notes.

I first attempted to maintain a Zettelkasten knowledge base in Notion, because:

Ultimately, I moved over to Obsidian, which had less polish but was better in one crucial aspect; it was easier to adopt a Zettelkasten-influenced system:

What Obsidian also had going for it:

Learning How to Learn (Coursera)

This was a Coursera course I audited last year, and while it felt a bit disjointed, I had a lot of useful takeaways, in particular:

How I’ve tried to apply this:

This doesn’t manifest in the workflow or the tools I use, but it’s had a massive influence in my learning journey last year. I had watched short videos on having a growth mindset before, but it was only after reading Carol Dweck’s book that I started internalising it.

Self-doubt has been a constant struggle for me the past few years, and it sometimes manifests as bouts of “why bother if I’m not cut out for it”, i.e. a fixed mindset. Going deeper in the topic via the book has helped me become more aware of my fixed mindsets, and enabled me to action on it. I regret not reading it earlier.

The fixed mindset reared it’s head a few times over the course. At the beginning, I had contemplated giving up after struggling to understand some big-Oh proofs. Most recently, I struggled with self-confidence after failing the weekly problem assignment. Thankfully, I stuck with it, mostly on the thinking of “well, at least I’ll learn something”. There was some personal vindication when I realised I was able to solve all of the questions in the final exam (albeit I still had to take it twice, due to some misreading and miscalculation).

It’s not a perfect book by any means - I’ve found it repetitive and generalising at times - but it’s been more effective at helping me apply the concepts than watching explainer videos or reading articles.

My knowledge base is still pretty small, it will be interesting to see whether this still holds up over time, especially as I start taking more courses and learning more things at work. I’m also not very disciplined with regularly going through the base to build connections, but I think that’s also part of it’s beauty - minimal process and mental overheads. Let’s see how the rest of the year pans out!

Zettelkasten from "How to take Smart Notes"